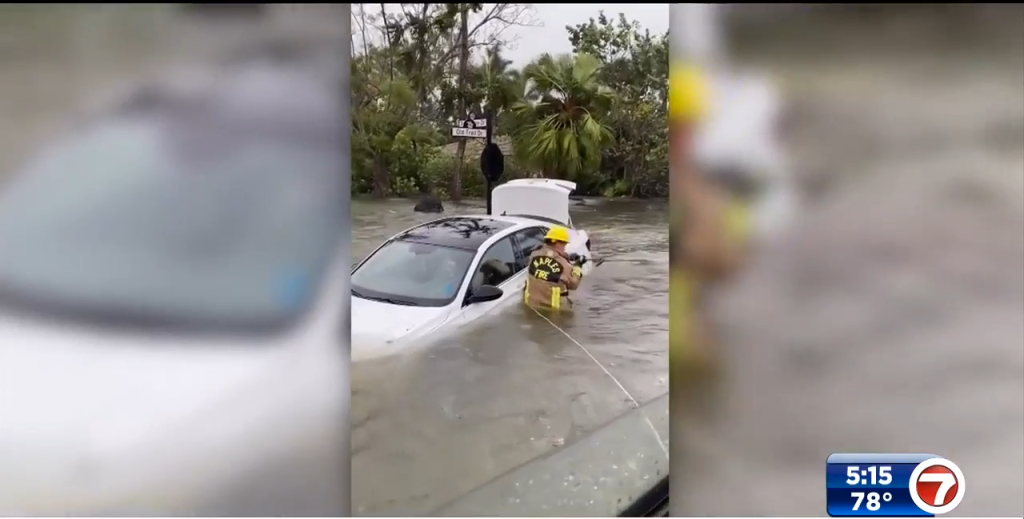 A Naples firefighter rescued a woman trapped in her car that was stalled by severe flooding on the street.

The official hammered open a window and gave the woman a life vest before she was pulled to safety.

As they continued to help others in the area, fire crews almost needed to be rescued themselves, as they were submerged in water.

On the video footage, a woman with the fire department shared what they experienced as Hurricane Ian ravaged Collier County.

“Now we have a truck issue, and the guys are pushing the truck out of the bay,” said the firefighter on a cellphone video.

The waters of the gulf seeped into the city and swamped fire crews of the Naples Fire Rescue Engine Company 1.

The first responders carried supplies from a fire truck that nearly went up in flames.

“Seemed like the truck was gonna catch on fire, and we didn’t want the station to burn down,” said a man with the Naples Fire Department.

The storm inhibited search and rescue efforts for hours but since the water has receded, helping residents is their first priority.

Meanwhile, a Division Chief at Orange County Fire Rescue, Lauraleigh Avery, heeded a warning to those in her area.

“At this point, everybody should be staying home or staying in the shelter. They should not be on the roadway. It only takes a couple of inches to move a car,” said Avery. “We were just issued, Orange County just issued — we had a flash flood warning issued until 2:45 in the morning, so we were already expecting about 12 to 20 inches of rain. Some places could see up to 30 inches. So stay home, stay safe and don’t get on the roadways.”

Join our Newsletter for the latest news right to your inbox

Tech company heads to Allen to grow its Texas offices