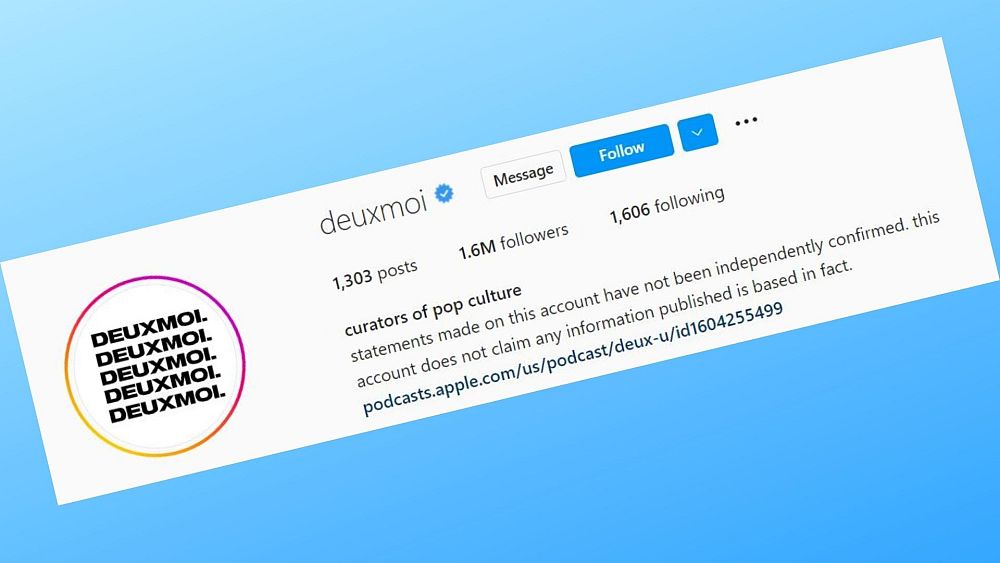 It’s been a hard week for Ned Fulmer.

You might not have heard of him, or the YouTube show ‘The Try Guys’ he used to be a part of. But Ned Fulmer is the latest celebrity to be taken down after salacious rumours around his marriage took over the internet. And the source of the rumours may have once again originated from the mysterious celebrity gossip Instagram account Deuxmoi.

This isn’t the first time a big star’s fall from grace starts when Deuxmoi posts an anonymous screenshot. It probably won’t be the last.

But who is behind the account shrouded in secrecy?

So you’re a try guy, cheats on your wife guy?

If you’re into YouTube celebrities, The Try Guys are up there with one of the biggest names in the industry.

What did you expect, analysing Shakespeare?

The story starts with fans of the show noticing the sudden absence of Fulmer from recent videos. Fulmer had stopped featuring in the regular videos or podcasts. Fans also started suspecting he’d been edited out of videos.

Then, someone started posting screenshots of texts and videos that supposedly showed Fulmer kissing someone that isn’t his wife.

More internet sleuthing uncovered that the suspected woman’s fiancé had removed all pictures of her from his Instagram.

Finally, after seemingly endless internet speculation, fans got their vindication. The official Try Guys page confirmed Fulmer wasn’t working with them anymore. Fulmer made a post confirming his extra-marital affair, and his wife made her own statement.

Although on the face of it, the whole thing was a classic example of the internet frothing at the bit for some juicy quasi-celeb gossip. Ned Fulmer, a self-professed ‘Wife Guy’, cheating on his wife kept a conversation around men cheating going that was started earlier in the month by Maroon 5’s Adam Levine’s texts to a much younger woman being posted.

But behind many of the rumours is the same controversial account.

Deuxmoi is an Instagram account posting daily stories with the best spotted gossip and accusations coming out of the celebrity sphere in years.

Since the controversy started swirling around The Try Guys, the Deuxmoi Instagram account has been buzzing with activity.

These stories have stoked flames that have given internet sleuths more ammunition to find extra details, likely contributing to the official statements given by The Try Guys this week.

Similar posts recently added to the rumour mill that was spinning around the new Olivia Wilde film Don’t Worry Darling.

How did the unverified posts from an anonymous gossip account gain such a stranglehold over celebrity news?

Just ten years ago, the world of celebrity gossip was dominated by the invasive paparazzi and public figures like Perez Hilton. Now, the entire industry is in thrall to the Deuxmoi account.

Deuxmoi’s rise was sudden. Early 2020, it was just an account from a fashion blog with a few thousand followers where the owner posted celebrity photos and shared established gossip.

Then, an anonymous message came through with details of Leonardo DiCaprio’s sex life. The woman screenshotted and posted it. Then, someone claiming to be Jonah Hill’s ex contacted her with gossip on him.

The ball was rolling for Deuxmoi.

Two years later, the account has over 1.6 million followers and regularly posts the daily submissions for the best gossip around.

The account makes no claim as to the veracity of the posts. It just posts them and lets the internet make what it will. On the official website, the ‘About’ page just reads: “Thanks For Visiting The About Page. This Is About All We’ll Say About Us.”

Most of the posts are either sightings or largely vapid candid observations about big names in pop-culture. But occasionally, the page is inflammatory.

When the Instagram page posted about the Amber Heard/Johnny Depp trial, there was a backlash on the subreddit dedicated to the account. Users felt Deuxmoi was unfairly siding with Depp, and questioned the influence of her account on the public’s perception of the case.

The subreddit which, according to Deuxmoi, was never associated with her, rebelled.

In its staunch support of Heard as a rare place on the internet taking her side, users came together against the Instagram poster.

“This sub may have a lot of differing opinions but the one thing that brings us all together is our strong dislike of deuxmoi,” one user posted.

Who actually is Deuxmoi?

There’s a few theories about who’s behind the account. The woman behind it has endeavoured to remain anonymous and never posts anything personal.

In a Vanity Fair interview, Deuxmoi admitted she lived in New York, had a career in fashion, and wasn’t earning anything from the page until she started selling merchandise in January.

For a while, theories abound that Hailey Bieber was behind the account – or at least knew the person behind it, after posts about a supposed pregnancy were followed by her saying she figured it out.

But she denied it in the Vanity Fair article.

Journalist Brian Feldman has recently made a gambit for working out the woman behind Deuxmoi.

Using information from the fashion blog Deuxmoi run by two women previous to the current gossip source iteration, he narrowed it down to two names: Meggie Kempner and Melissa Lovallo.

Little is known about the two, but Kempner is the granddaughter of the late famed New York socialite Nan Kempner, while Lovallo apparently works in fashion. Neither have been confirmed by the account.

Hardly ripping off the mask of Batman, is it? We don’t know what you expected.

Oscars 2023 Will Have All Categories During Live Show

Will Smith Opens Up About Slapping Chris Rock at Oscars: ‘I Lost It’